Expledge received 3 complaints in the 6 years that we have been in business. On this page, we clarify the story behind the complaints/reviews and provide proof to support our claims.

The complaints were only submitted on websites (i.e. Scampulse, Reddit) that:

As of July 2022, Expledge received positive reviews on these credible websites:

None of these reviews were faked or purchased. If they were purchased then we would have hundreds of positive reviews.

2 scam complaints were left on Scampulse (not a credible website):

Scampulse is not credible because:

Information about the images below:

Complaint 1, Image 1. The complaint on Scampulse: 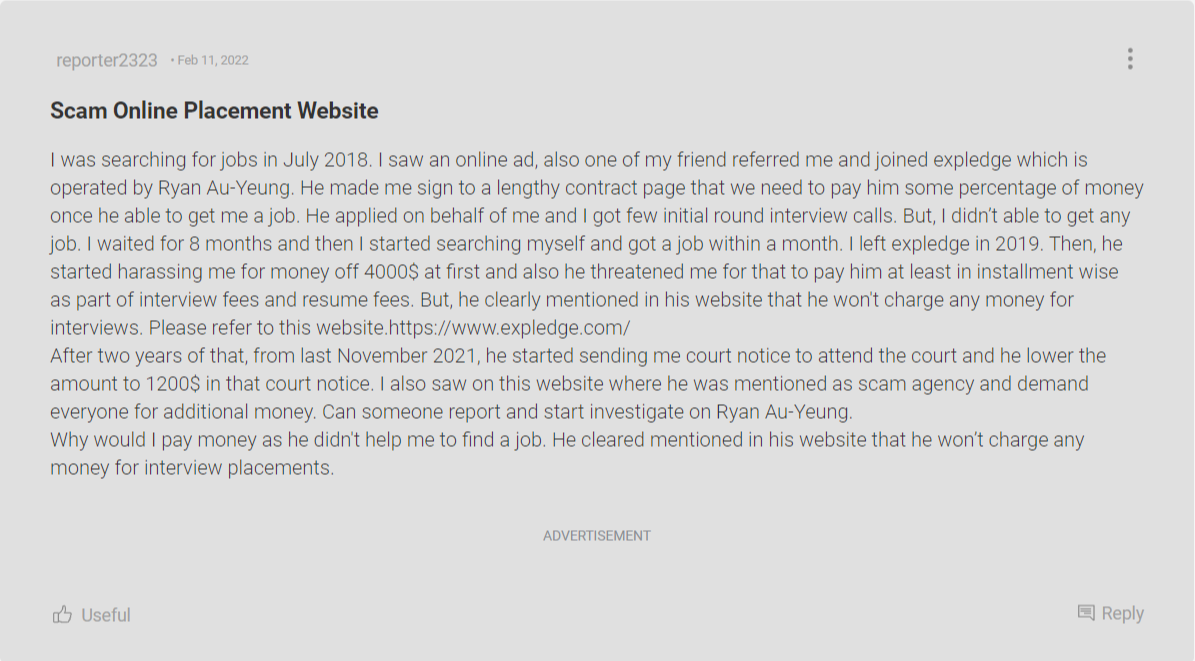 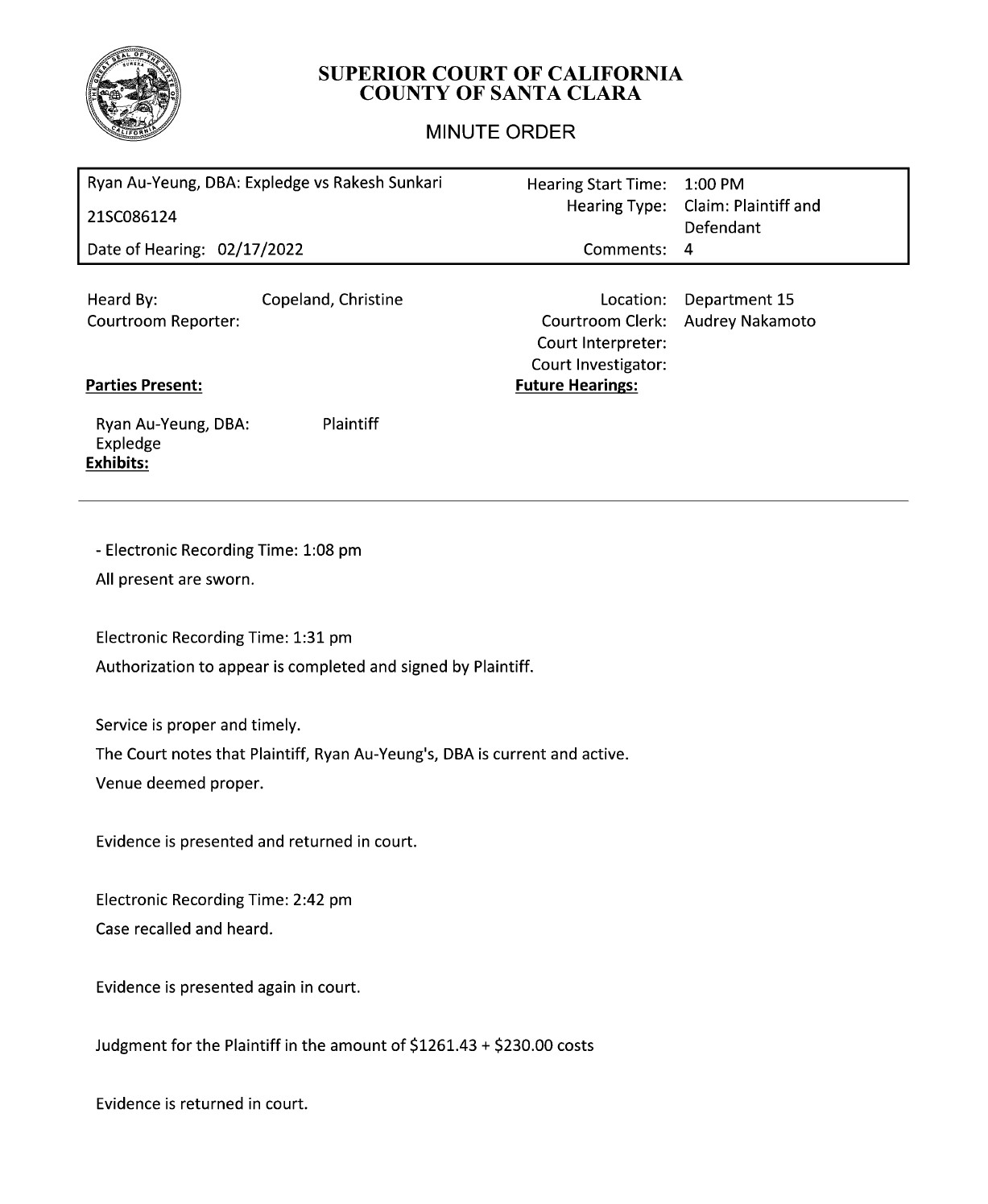 Information about the images below:

Complaint 2, Image 2. She paid the invoices: 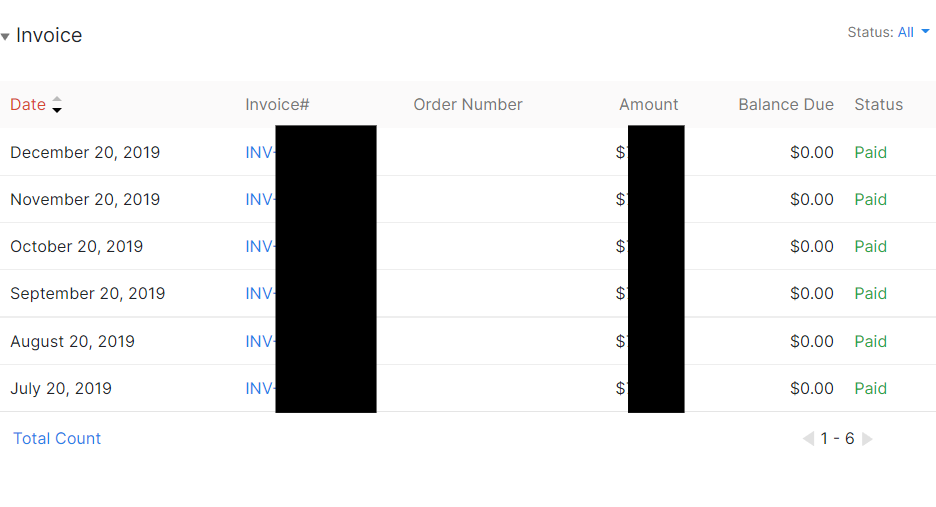 Google Rating
4.9
Based on 28 reviews

Jaganathan Nagaraj
03:17 01 Dec 22
expledge support in jobsearch was much helpful and they did a great job, can be trusted for their work and commitment.

SHIVANI DEDHIA
20:07 23 Aug 22
The team at Expledge is very helpful! They are detail oriented and extremely organized which makes the job application process smooth. They respond to any queries almost instantaneously which is so helpful.

Satyam Mishra
20:39 01 Aug 22
Helped me a lot while job search to focus and prepare for the interviews! Will recommend it to everyone who is looking for jobs.

RIDWIK MODI
19:22 18 Jun 22
I highly recommend Expledge. They helped with my job application and got me some amazing interviews. They are very professional and organized with their work. They have saved me countless hours with the entire application process.

Varun Gattu
21:37 26 Mar 22
Expledge has been awesome for finding and landing in the right jobs! I personally have recommended a lot of people so far and will continue doing so. They're very professional and have a very good business model.

Garry Ancheta
20:33 07 Feb 22
I highly recommend Expledge since they helped me get job applications and interviews out! Even though I did not get my job offer through them, they significantly helped my confidence in getting interviews. They'll help you all the way through to the job offer and are transparent with all the process!

aswanth ash
02:52 14 Dec 21
I highly recommend Expledge they are highly professional and very helpful in job search, mainly we can concentrate on job interviews. submissions and employees referrals will be taken care by Expledge Team so you will save lot of time and quickly we can get job

kishore kumar
16:46 02 Dec 21
I would surely suggest Expledge to who ever is in need for job shift. They are professional and they were prompt in all my queries. I will surely suggest to my friends & families.

Pranita Ramteke
22:45 30 Nov 21
I am so grateful to Expledge for every single job application and the interviews I got through them. It is so convenient to work with them especially when one is exhausted to find more places to apply at. I was amazed by the amount of work the team was doing throughout the job search for me and I could not be happier since the friends I referred got placed through Expledge as well.

Sai Dheeraj
23:16 29 Sep 21
Working with Expledge is really great. Its not like any other Staffing Agency that would throw you bunch of un related job postings. They understand your requirement and your situation very well and then they make a plan accordingly and execute them. They are very honest, transparent and very Professional.I would definitely recommend them to anyone who is in search for a new job. Kudos to the whole Expledge team.

Ogety Bhavya
04:36 28 Jul 21
Excellent services by Expledge. I would suggest Expledge to anyone who are in search of full time or contract jobs.

Sai Saketh Gopaluni
17:59 19 Jul 21
Expledge is very helpful for students who are exhausted applying for jobs daily and are not able to manage time between, preparing for interviews and applying for positions. I highly recommend using their service as they will rigorously apply for you while you prepare for interviews. The pricing is very reasonable as well.

Kiran Gurijala
20:36 18 May 21
Expledge has been of great help in terms of finding a job. Ryan who is the job search consultant is very helping and clear.- With in 2 months period, I Got 50 plus interview calls and 10 of them went for onsite too(including Microsoft, Amazon, Vmware, Goldmansachs, ebay and Uber..etc)- ​Ryan has unique ways to apply job so that your resume will pick 7 out 10 jobs they applied_ Ryan applies the jobs based on our criteria(location/salary/position)- All the services provided like resume edit are really good unlike costly services present online like top resume.- As they say on expledge website you can focus more on the interview preparation part.- All the concerns can be directly discussed with Ryan and he is really quick with his replies

K D
00:11 02 Dec 20
Ryan has been extremely helpful and responsive. He is super-quick to respond to any questions. I got a ton of interviews due to Expledge, I am grateful and highly recommend this service to every job-seeker.

aishwarya rajan
22:02 22 Oct 20
Ryan is pretty much responsive and worked with me with full patience to figure out issues related to job search and applied for a lot more number of jobs than I could.

Vidur Chanana
20:33 08 Sep 20
Ryan is an absolute pleasure to work with. He’s smart, diligent and professional. His services are a must, whether a newly grad or an experienced professional. His team helps you out landing job interviews, so that you can concentrate on preparation. Would use again, if needed. 5/5: Would recommend

Muscular Monk
12:04 20 Apr 20
Expledge has been of great help in terms of finding a job. Ryan who is the job search consultant is very helping and clear. All the services provided like resume edit are really good unlike costly services present online like top resume. As they say on expledge website you can focus more on the interview preparation part. All the concerns can be directly discussed with Ryan and he is really quick with his replies.

Rutika Patel
19:26 06 Apr 19
It was a great experience with a team of Expledge. I have found a job with great opportunity. they never gave up on me. I would recommended to every student outside. They will a job out side for sure. I can have bet on this. Keep it up.
See all reviewsWrite a review